We hope everyone is surviving this bullshit known as summer, heat index of 100 and WHAT?

If you’ve been up to the studio in the last few months you’ve probably met, Brandi, our first apprentice. She’s one of our people for sure. We are excited to begin our apprenticeship program this summer. One of the most important things for a hairdresser is to have a thorough and well rounded set of references.  Every week we give Brandi a new person or movement to research and report back on. She is so enterprising she’s started her own blog!

Here is her most recent report on the famed Mitford Sisters.

Referred to by some as the Kardashians of their time, the Mitford sisters were six British sisters who led interesting, and sometimes scandalous, lives. Diana, Jessica, Unity, Nancy, Deborah, and Pamela were stylish yet controversial icons from an aristocratic family who were eventually separated by their different ideologies in the time leading up to the second world war. 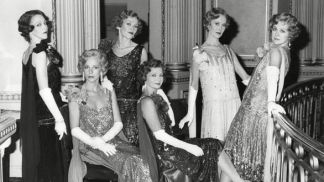 Diana, often called the most beautiful of the Mitford sisters, was known primarily for her marriage to Sir Oswald Mosely who was the leader of The British Union of Fascists. Hitler, who Diana was introduced to by her sister Unity, was a guest of honor at the wedding. Diana eventually moved to Paris where she became a fairly successful writer and book reviewer. Diana is typically included when talking about the feminine Fascist movement, which was a group of women who supported advances in women’s suffrage and in the workplace while incorporating Fascist discipline.

Jessica Mitford was a journalist, civil rights activist, and a member of the Communist party. She and her second husband moved to America and Jessica became an American citizen in 1944. Jessica spent a lot of her time during the 1950s promoting Communism in America during the Red Scare and was eventually called to testify because of her actions.

Unity Mitford was a close friend of Adolf Hitler and was an avid supporter of both Nazism and Fascism. Unity, who had worked her way into the inner circle of Hitler, eventually ended up attempting suicide when Germany declared war on Britain during World War II. She was sent back to England after her suicide attempt where they decided it was too risky to try to remove the bullet from her head. She ended up dying from illness shortly after.

Nancy Mitford, the oldest of the Mitford daughters, was a well-known author who wrote semi-autobiographical novels about upper-class life in England and France. She is also described as having sharp and sometimes provocative wit. Nancy Mitford was considered an authority on manners after writing about U (upper) and non-U language, which was eventually mocked by her sister Jessica (the Communist).

Deborah Mitford, the youngest sister who was called “Debo” by her family, was the peacemaker and arguably the most successful and balanced of the six sisters. Eventually becoming the Duchess of Devonshire, she became the public face of Chatsworth and contributed a great deal to its restoration and enhancement. She was the final living Mitford sister until she passed away in September of 2014.

The least well-known of the six Mitford sisters was Pamela Mitford. A woman with beauty possibly rivaling her sister Diana, she married physicist Derek Jackson and lived a very low-key life. She avoided her controversial sisters except for when they came to her in times of need. According to people that knew her, she enjoyed cooking and making people feel at home.

Despite their reputation for being extremely controversial, especially for their time, the Mitford sisters made a lasting impression on American, British, and French fashion, literature, politics, and much more. Their beauty coupled with their origin from a well-known aristocratic British family helped them into their achievements which allowed them to be inspirations and influences even today. Though each sister went in a different direction, they all made an impact, especially considering the time period and that they were women, that will continue to influence people for years to come.

Stay tuned for next week’s blog post about other influential people!